Reserve Bank of Australia raised its key rate by 50bp. The World Bank lowered its growth forecast for the U.S. economy. U.S. retailers cancel orders on products. Janet Yellen acknowledged macroeconomic problems in the U.S.
The Reserve Bank of Australia raised its key rate by 50 bps to 0.85%. RBA Governor Philip Lowe said the double-take of the regular rate was necessary for the stability of the local economy due to rising inflation due to growing energy prices. It is worth noting that on the background of gas shortages, the energy crisis is exacerbated by the shutdown at least 25% of coal-fired power plants due to weather events and other reasons.
Meanwhile, the World Bank has lowered growth forecasts for the US economy in 2022 from 3.7% to 2.5% and for 2023 from 2.6% to 2.4%. At the same time, retailers are cancelling orders for new products especially for home furnishings and clothing, and cutting prices to get rid of accumulated stocks. According to a Bloomberg report in May, all major U.S. retailers reported increases of stock levels in stores. Target reported a 43% increase of stock, Walmart reported a 32% increase, Macy's reported a 17% increase, and Costco reported a 26% increase. As a result, these large retailers now face rising storage costs or have to give shoppers big discounts to make room for more products. This means an increase in the cost of the remaining products for consumers to compensate discounts and an increased cost of managing and storing inventory for companies.
It is also worth noting that in the U.S. there is "shrinkflation" - a decrease of package sizes by manufacturers without lowering prices. This phenomenon is designed to hide inflation from the consumer, because customers will see price increases but will not watch the net weight or small details, such as the number of sheets on a roll of toilet paper.
In the backdrop, U.S. Treasury Secretary Janet Yellen acknowledged that the U.S. faces macroeconomic challenges, including unacceptable levels of inflation. The statement also said that the steps taken against inflation are crucial.
Despite key rate increase by 50bp, AUD/USD quotes failed to move up. The statements of U.S. Treasury Secretary and unpleasant news show that the Fed might take more aggressive steps to tighten monetary policy in the coming Wednesday than it was expected by experts months earlier.

AUD/USD fell below the key Fibonacci level of 61.8 and went into consolidation. The RSI oscillator crossed the 50 level from top to bottom. 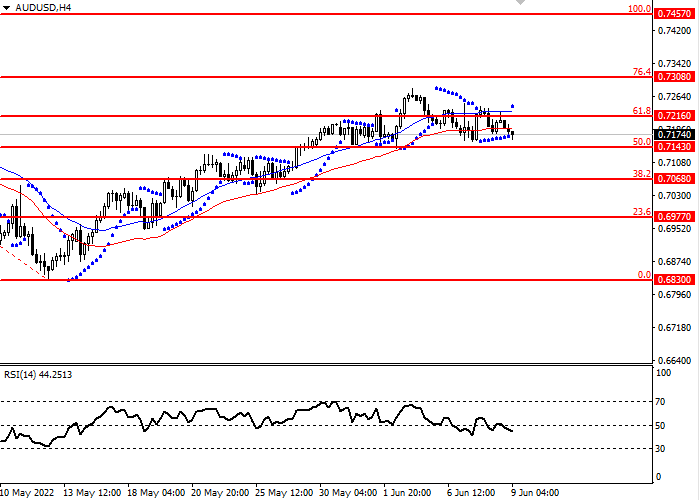