The Organization for Economic Cooperation and Development warned that the Reserve Bank of Australia might need to increase interest rates more aggressively. The Commonwealth Bank of Australia predicted a sharp decline of housing prices. The U.S. dollar index hit a 20-year high. U.S. consumer sentiment fell to its lowest level since records began.
The Reserve Bank of Australia (RBA) may need to raise interest rates more aggressively to curb inflation, the Organization for Economic Cooperation and Development (OECD) warned. Also, the OECD declared that it expects the monetary rate will reach 2.5% by the end of 2023. The organization also warned that strong global inflationary pressures and a tight labor market pose an additional risk of higher inflation in Australia. Expect the Australian economy to grow by 4.2% in 2022, a little faster than the 4.1% growth rate projected in December but now expected to slower growth in 2023 to 2.5% instead of 3%. It is worth noting that the OECD believes that skilled migration will begin after the opening of international borders. Australia's engineering vacancy rate is growing by 97% in 12 months.
However, the Commonwealth Bank of Australia is now expecting house prices to fall by 18% as the RBA continues to increase interest rates to beat the highest inflation in 32 years. The RBA currently expects inflation in Australia to continue to increase and reach 6.25% by the end of the year.
Meanwhile, the U.S. dollar index rose above 105 points for the first time since December 2002. A rising U.S. dollar index means it is strengthening against a basket of currencies. Nevertheless, the U.S. Michigan Consumer Sentiment fell to 50.2, its lowest level since records began. Also, the Consumer Price Index (CPI) showed that prices increased 8.6% in May from a year earlier, which is the fastest annual jump since late 1981. U.S. consumers' assessment of their personal financial situation deteriorated sharply. Half of all U.S. consumers spontaneously mentioned gasoline during interviews, and 46% of consumers attributed their worsening estimates to inflation.
In the short term we should expect further strengthening of the U.S. dollar. However, in Australia, judging by the labor market, there is potential for industrial and mining growth, while in the U.S., on the contrary, a sharp increase in interest rates in order to deal with inflation may lead to a recession. The Fed's next Interest Rate Decision is Wednesday.

AUD/USD fell below the key Fibonacci 23.6 level but failed to fix  below. The current trend is downward. RSI oscillator is below the 30 level. 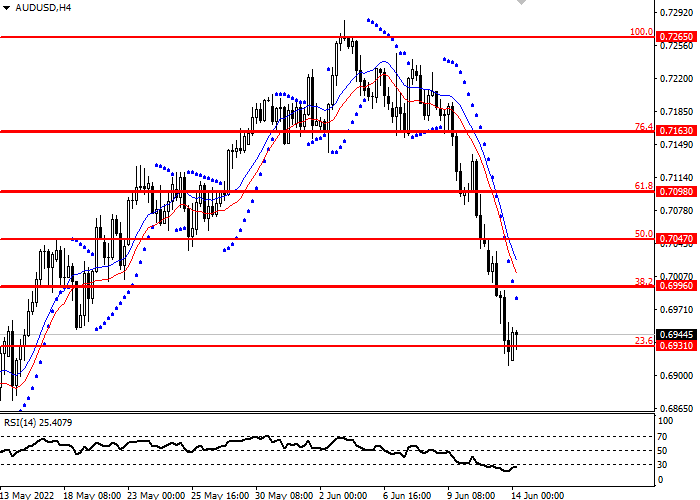