USD/JPY consolidates around 135.000 amid silence before the announcement of the new key rate in the U.S.

Suspension of so rapid growth in the pair, which has overcome a mark of 135.500 the day before, probably due to falling U.S. Treasury yields and traders expecting the announcement of a new key rate later today.

In addition, there was positive macroeconomic news on Japan earlier today, with Core Orders for machinery production coming in at 10.8% for April versus expectations of -1.5% and 7.1% last month. Annual data for the same indicator was 19% against expectations of 5.3% and 7.6% last year, respectively. Thus, it seems that the cheap money policy so consistently pursued by the Bank of Japan is beginning to bring its dividends, causing positive expectations in the industrial area of the economy.

Also in this situation the Japanese stock markets showed decline, so Nikkei 225 and Topix decreased by about 0.6%. Companies related to the technology and energy sectors showed the biggest drop, amid difficulties with the logistics of technological components and rising oil prices. In such a difficult situation the growth of orders in machine-building is conditioned by persisting high domestic consumer demand and desire of economic agents to convert monetary savings into material goods.

At the same time, not the most favorable economic news was released in USA, in particular the US Dollar Index (DXY) showed decline from recent highs reflecting a similar drop in government bond yields.

The key interest rate hike expected by most analysts is 75 basis points. Thus on the pair it is expected continuation of a bullish trend, and, certainly, the further movement upwards cannot be avoided in a situation when the Bank of Japan is the only central bank of the largest economies in the world, continuing a soft monetary policy in the current circumstances. 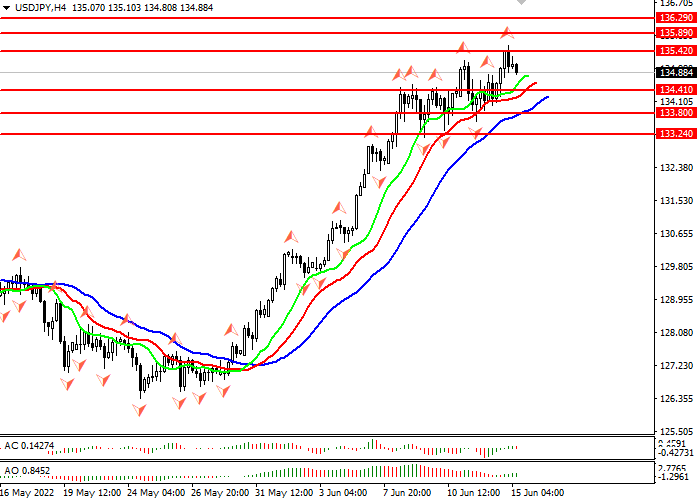 Alligator is hungry: its mouth is wide open, its jaw (blue line) is low under the lips and teeth (green and red lines), the instrument is in an uptrend. The nearest fractal above the alligators teeth (red line) is at 135.420. Awesome Oscillator (AO) and Accelerator Oscillator (AC) are both in the green area, the bars are close to the zero level, which is a strong confirmatory buy signal.