The USD/CHF pair opened lower at the beginning of todays trading session. The pair lost all of its gains in the second half of yesterdays session, continuing the bearish performance from mid-June.

The pairs losses came after Federal Reserve Chairman Jerome Powells statements yesterday, Thursday, during his statement before the US Senate Banking Committee, regarding the possibility of the economy being exposed to a recession during his effort to suppress inflation.

Where Powell stated that the central bank is not trying to create an environment that pushes towards a recession, but it is certainly possible, given the recent global events, especially the Russian-Ukraine war and the Covid-19 pandemic, which made it more difficult to hold down inflation without side effects. He added that the major goal for them is to achieve a safe drop in inflation rates, but the path to this goal has many challenges, and that the Central Bank is committed to controlling inflation and has the tools to achieve this goal. As Fed Member Michael Bowman added on Thursday, she supports a 75 basis point rate hike in July followed by 50 basis point increases in the next few meetings.

In addition, S&P 500 futures declined 0.30% while US 10-year Treasury yields remained unchanged at around 3.09% after dropping to a two-week low the previous day.

Looking at the most important events affecting the pair, investors attention will be directed to the US macroeconomic data represented in new home sales for the month of May, as well as the Michigan consumer confidence index.

On the 4 hour chart, the instrument is holding onto the moving downside of the Bollinger Bands. The indicator is directed downward and the price range has widened, indicating that the current trend is about to continue. The momentum chart is below the 100 level, which is giving buy signals. The Envelopes indicator gives clear sell signals. 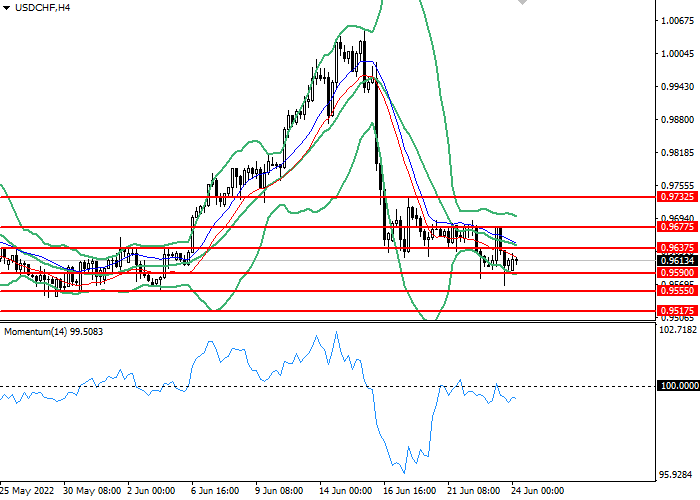